A media converter is a device which connects networking components which are not compatible. One such common example is the conversion of electric signal in twisted pair of copper into light waves in fibre optic cable. These converters can also be used to convert different modes of fibre optic cable such as converting multi-mode fibre optic cable into a single-mode optic cable. Other such conversions include dual fibre to single fibre cable. A media converter can also be used to transform between various wavelengths for a few necessary applications. Thus, it is an economical and effective way to connect network devices which might not be compatible with each other. With their help, new and better technology can be used with already existing components and achieve better results.

A fibre media converter is a network device which assists in connecting two devices such as Local Area Networks (LANs) which are not compatible with each other due to them having different speeds or types of modes. This can help in connecting several such components and convert them in to a larger area of networks. This connection of networks will allow faster transmission of data to larger distances. The most 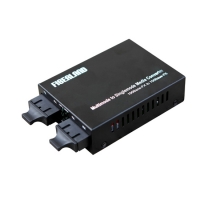 common type of conversion done by a fibre media converter is the connection of a device using copper twisted cable to a fibre optic device. There are several disadvantages in using twisted copper pair. Twisted pair offers transmission to a shorter distance compared to optic fibre (twisted pair works unto 100 metres while optic fibre transmits data unto 80 kilometres) and the maximum networking speeds offered by them is also much lesser (twisted pair gives a maximum speed of 10Gbps while optic fibre boasts a maximum speed of 200Gbps). A fibre media converter is compatible with several communication protocols such as gigabit Ethernet and fast Ethernet. It can help in the connection of devices working with twisted pair cables, coaxial cables and optical fibre.

There are a lot of advantages in using a fibre media converter. Some of them are: